Today I attended a poetry slam in my son's fourth grade class. All the kids stood up and read poems that they had carefully crafted, each one more beautiful than the last. The best were the kids' "I am from" poems, where they told about all of the things that make them who they are. It's amazing what kids will pick out of their own lives that they feel shape them. My son had some beautiful lines, mixed in with some totally invented ones about fracturing a rib while doing some athletic event and waking up in the hospital (no, this never happened). He makes shit up, wonder where he gets that? 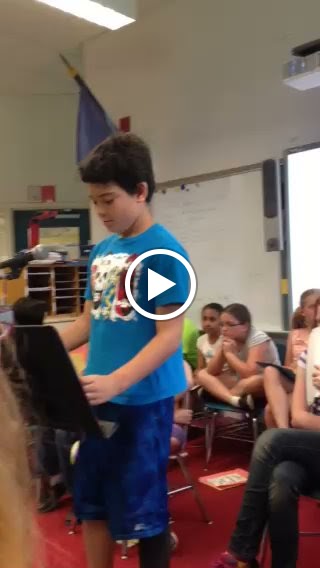 His teacher also asked the parents to write a poem for their children that she would keep a surprise. She then read them out loud to the class and each kid had to guess which poem was for them. Nate was pretty adorable when she read mine, total embarrassment mixed with delight. So super cute. I totally cried. I am not a poet by any stretch of the imagination but here's my poem for my boy:


He came to us on Mother’s Day,
His big brown eyes took my breath away,
A beautiful baby I could only dream of,
One quick glance and I knew it was love.


At first his breathing wasn’t right,
In the ICU he spent his first night,
But soon I held him in my arms,
And first was weakened by his charms.


He holds my heart tight in his hands,
Even now with all his demands,
X-box, iPad, and TV,
Sleepovers, junk food, play dates please?


Now as my boy turns to a man,
And grows up as fast as he possibly can,
I love him and I tell him so,
He takes my heart with him wherever he goes.


My boy that came on Mother’s Day,
Is the greatest gift that I could say,
I’ll take his anger, spunk, and joy,
For me there is no other boy.

Posted by Kate Hartshorne at 3:09 PM No comments:

This week I celebrated my birthday, or I should actually say, I tried to avoid celebrating it. I don't know exactly what it was about turning 35 that really depressed me, but it got me good. Maybe it was the chipper young gal at work who exclaimed "Oh! You're now AMA (advanced maternal age)!" I almost punched her. Almost. Maybe it's the life filled with turmoil and change that makes getting older more depressing, or maybe it was that I spent the weekend in New York with my best friend having a wonderful time talking about crown molding and falling asleep at 10:30 (which was a really awesome weekend, I am just very aware that it is a new phase for those of us who have always torn the town up). All of these things are fine, but on the actual day together they felt like a ton of bricks smashing me in the face.

Everyone I know who is older than 35, of course, is very busy telling me how young I am. Well, sure, that's easy for you to say, but the reality is that this is the youngest I'll ever be again, right this second, and man that shit's scary. Also I'm rolling into 35 newly single after a long time, with a plate full of responsibilities and a strong desire to run away and hide my head in the sand. Good times all around. On the upside I know that I have an unusual amount of amazing people in my life, and I am probably one of the luckiest people alive in that respect. I also am blessed to have a job I love, and kids who rock, so it's really not so bad. I'm just hoping that next year I get my birthday mojo back and can celebrate in true Kate fashion. 36, nothing scary about that!

Posted by Kate Hartshorne at 7:34 AM No comments: