I just returned home from two weeks in the Dominican Republic, a country that helped to shape the core of who I am. I have been back often, as most of you know, but for the first time in 16 years I was able to visit the town that first made me fall in love with the island. I did not visit San Cristobal while I was married to Francisco for many reasons, most of all because he wasn't comfortable with the idea, and also because it was logistically hard to fit into our trips there. Jon was on board with the idea of us visiting the town I called home back in the 90's, and was excited to meet the people there, so we went together.

It's interesting visiting a place that you were so desperately in love with, so long after that time. So much has changed, and yet somehow nothing has changed. Many people have moved, died, or grown up and didn't recognize me, but the feeling was the same. It's a gritty town with an edge, but at the core, just like any other place on the island, it's filled with loving people who are trying their best to get by. We sat on the porch at Maria's (a woman who was like a mother to me), although she had just recently left for a trip abroad to visit her daughter in the Netherlands, so I was unable to see her. Life flowed around us the way it usually does, and I felt like I had never left. I haven't had so many feelings overwhelm me in a very long time. I found myself texting Jane (my best friend who lived there with me) to give her a sense of how it felt, but even with that I couldn't make it clear how surreal it was.

Being back in San Cristobal was like floating like a ghost over my adolescence, viewing my 18 year old self from above and feeling like I was watching her from above. It felt like going home again. The poverty there is always staggering, and it always leaves me with an ache to not be able to help my friends more, but I was able to do a lot with the donations we had collected to rebuild a friend's home that was destroyed by fire. We were also able to pay for medical expenses for several  people and buy groceries for some hungry families, so our trip was helpful on many levels. I wanted to stay there forever, or at least for a few days, and hopefully at some point I will be able to go back and stay a while, as opposed to just a few hours.

The rest of our trip was exciting and packed with fun and sunshine. We brought my daughter and three of Jon's kids, who did well with the culture shock. I was ready to come home after the two weeks, as the exhaustion of translating was wearing on me, and I missed my surly teenage son (who sadly didn't want to come with us for many teenage angsty reasons). So we're back in the gray New England winter with cozy fires in the pellet stoves and dogs to snuggle with, and our kids are back to ignoring us and hiding in their rooms. Life with teens is a constant feeling of loneliness and angst, but at least I have the memory of the warm salt water washing over me and the sun of the island to keep me company. 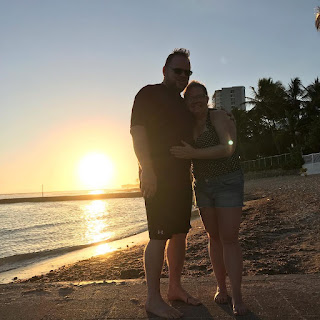 Posted by Kate Hartshorne at 8:33 AM 2 comments: