Honeymoon in Cuba: Exploring beauty in a crumbling paradise

CUBA! We are back and I can't find enough people to tell how much I love this quirky island. I wish we'd had many more weeks to explore all that this lovely time capsule has to offer, but alas, it is hard enough finding five days together without kids, so we chose to enjoy the hell out of every moment.

The first, and most important thing I have to say about Cuba is that this island is home to the nicest people in the world. I am still in disbelief at how kind and helpful every person we encountered was to us. Not only was everyone extremely helpful and friendly, it was in a completely genuine and non-solicitous way. They were nice to us because they ARE nice, not because they felt like they had to be, or were trying to get anything out of it. In a time where it feels like Americans are frequently dropping the ball on kindness, this welcoming community was a tremendous relief. 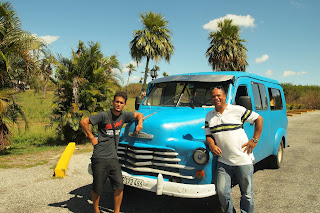 Secondly, the Cuban people were greatly open to talking about life in Cuba, which is fascinating on many levels. I can definitely see both sides of the struggle, where people are upset about their lack of progress and upward mobility, but yet no one is starving, you see nobody begging in the streets, bleeding to death from untreated medical issues, or the rounded bellies of malnutrition. Nobody flaunts their tremendous wealth, and nobody is left to flounder in poverty. Everyone is educated, but everybody earns an extremely small salary (as in $10 per month). No one we met had more than one or two children, as birth control is wide spread and accessible, and abortion is safe and legal. In Vinales, a mountain town in the north of the country, no one locks their doors, even at night, because they just do not steal from each other. Crime is almost non-existent. 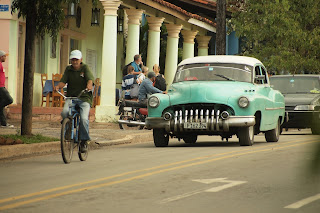 We spent the first two days in Vinales, hiking through the valleys where the country grows the tobacco for their famous cigars. We hiked on foot, instead of the widely offered horseback tours, and we were so glad we did, as we learned more from our guide Claudia than from almost anyone else on the island. The horseback tours offer beautiful scenery, but not a lot of conversation with the guides. We hiked into the Valley of Silence, a green lush landscape dotted with farm animals (interesting side note: cows are all owned and sold by the Cuban government, if you kill a cow in Cuba you get more jail time that you do if you kill a person. Beef is only sold in government restaurants). 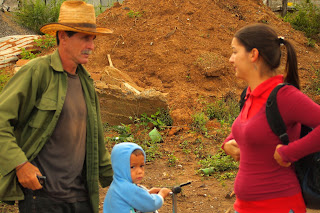 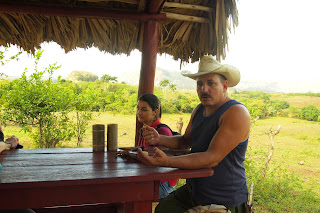 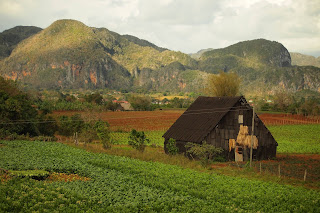 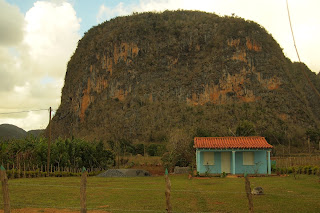 We watched a local farmer roll cigars and bought ourselves cigars directly from him. The farmers are allowed to keep 10% of their tobacco to sell, while 90% of the tobacco gets taken by the government and made into the famous brands like Cohiba and Monti Cristo that are so highly sought after and expensive. 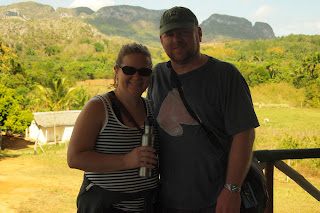 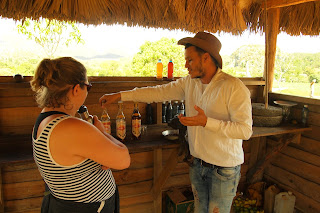 It was striking in Vinales how all of the food that was eaten and served was fresh, local, and in season. There is very little that is traded so the Cuban people work with what they grow and raise, which seems a million times healthier to me. There is almost no pre-packaged foods, and everyone goes straight to the farm to buy their goods, or lets the vendors come to them with their wheelbarrows full of bread or fruits. We ate fresh papaya and pineapple daily, rice and beans of course, and many other delicious concoctions cooked up by Dayanette, the owner of the Casa Particular we called home. 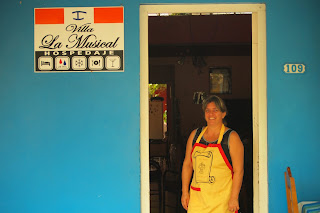 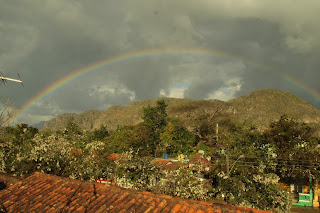 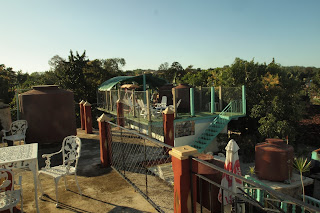 In Cuba, the most popular way to visit is to stay with someone in their home, in a sort of Air bnb type scenario. Homeowners can rent rooms out to tourists for a fraction of the price of what a hotel room would cost (we paid $30 per night). The rooms that we stayed in were clean, private, with our own bathroom and a private terrace, and both had a rooftop patio where we could see a tremendous view of the mountains or the ocean, and the stars at night. The casa owners were a tremendous help arranging tours, taxis, and just giving us ideas of where to go and what to do. Hosting tourists is their livelihood, and they take great pride in providing us with all of the makings of an excellent trip. Casa owners will provide meals for you, and this is absolutely the way to eat in Cuba. Restaurants are not excellent, but home cooked meals are spectacular. We had breakfast and dinner each day in the two casas where we stayed, and what a fantastic choice. 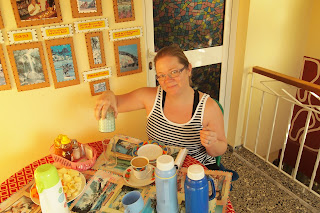 We spent our last two days in Cuba at the beach in a town called Guanabo, just east of Havana. We traveled to Guanabo via a 1953 Plymouth taxi driven by a man named Alexis, who made a pit stop at a local waterfall in Soroa, and natural pool where we ate lunch and swam in the cold fresh water. Alexis charged us $80 for the day and was happy to wait for us as we explored Soroa. The only glitch was keeping him awake for the second half of our four hour drive as the rice and beans had him nodding off while driving. Yikes! 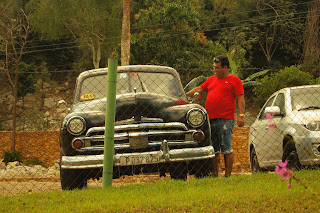 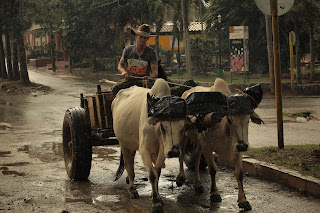 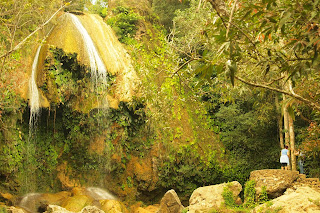 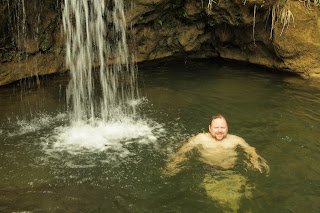 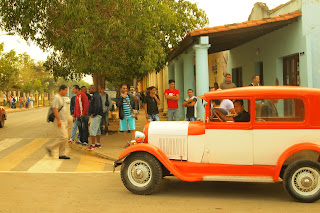 We wanted to avoid the city this trip, as we were coming and going quickly, but we wanted some time at the ocean. The casa we rented was run by a woman named Marlene, who rents two rooms upstairs from the family's home. This casa felt more like a hotel and less like a home share, with the rooms having a separate entrance. The beach was a quick walk, and although it was quite removed from the town of Guanabo, it was nice to have a private stretch of gorgeous beach to enjoy on our own. Guanabo is a town where the Cuban government sends its employees for vacation. The government owns tons of crumbling houses along this strip of beach and rents them out for a week at a time to Cubans and their families. Locals told us that in the summertime the town and beach are packed to the gills with vacationers, but in the off season it was not the most exciting town to visit. We found the beach in Guanabo to be relaxing and unassuming, a great place to kick back and enjoy a rum and coke and a book. 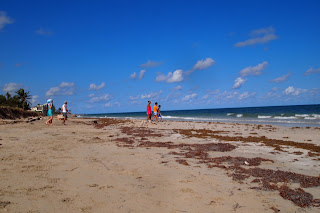 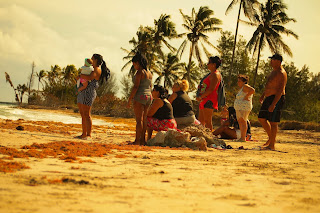 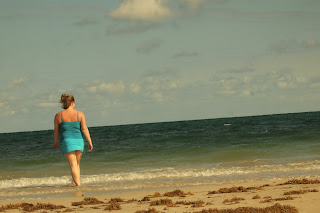 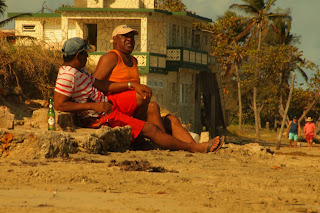 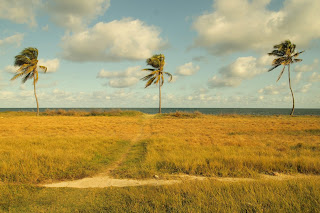 The saddest part about our Cuban honeymoon was the fact that it ended so quickly. We will definitely be returning to this magical island, feeling more confident in our destination choices now that we've gotten a bit of a feel for how to get around. Cuba is a place of unexpected beauty and crumbling infrastructure, huge smiles, and deep connection to what's really important in life. Visiting Cuba has awakened a part of me that has been closed for a long time, the desire to travel again to places that are real and beautiful and not made shiny in the name of tourism. Let this be the beginning of many more adventures to come.
Posted by Kate Hartshorne at 7:59 AM No comments: